Our goal for Day 3 was to visit One World Trade Center and the Observatory on the 102nd floor.  We pre-purchased tickets for the mid-morning time slot (11:00 to 1:00) on line which proved to be helpful in keeping us on track–it’s easy to get distracted in the Big Apple!  I would have to say, though, on a Sunday in early November it probably didn’t save us that much time or matter too much.  However, in the busiest time of the summer I would definitely encourage pre-purchasing tickets.

Along the way, we stop off at Grand Central Station for a quick pastry and coffee to start the morning. Grand Central Station is a beautifully restored building–thanks to Jackie Kennedy Onassis–and is a hustling bustling hub of transit users making their way to somewhere else.  It is also a good place for people watching.

Our walk from the Brooklyn Bridge City Hall Subway Station brought us by St. Paul’s Chapel of Trinity Church and Cemetery at the corner of Wall Street and Fulton.  The church was built in 1766 and dates back to George Washington who was a parishioner.  Well worthy of a visit, we will need to come back another day since we are on a fairly tight schedule. St. Paul’s still has active services with over a million visitors a year.  Visit the church’s website for the stories of it’s past. 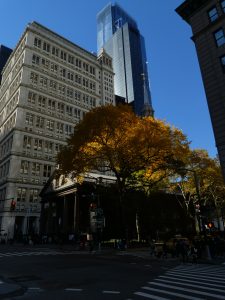 The journey from the ground up to the 102nd level of One World Trade Center is very well designed.  From airport quality security on up to the observation level via the fastest elevator I’ve ever experienced, the ride up is an amazing experience in and of itself.  As you ascend to the top, the LED screens around three sides of the elevator cab depict the transformation–geographically and  historically–of New York City’s skyline.

Once you arrive at the top, you’ll experience an opening scene explaining what you’ll see from the observation level.  Also, you’ll be subjected to some soft-selling of extra services such as renting interactive iPads which explain the scenes of the city in each direction. They are available for a small fee and probably worth the cost if you are unfamiliar with the city. We declined since we had two people in our group who could explain what we were seeing.

Back on the Ground

When you plan your visit to One World Trade Center, plan for spending the better part of the day just to see as much of the site and the 911 museum as possible.  As you arrive back on the ground from the observation level, the options are numerous.  We did not have time for the museum but if you have time, you should definitely make the effort to visit it.

Our focus was to visit the new transportation center designed by Santiago Calatrava, a Spanish structural engineer and architect.  The design is nothing short of breathtaking and is iconic in and of itself. Oh, and the shopping is pretty good too!

There are many places to eat around the Transportation Center and One World Center but Stephanie knew of a fun place called Eataly. Eataly is located just off the Transportation Building lobby…follow the signs…up on the second floor of a neighboring building.  The store is hard to describe in just a few words but it all centers around food and more food–Italian, of course.  Eataly is a combination Italian mega-grocery store, restaurant and wine bar(s) experience.  Naturally, there are deserts, too!!   If you love Italian food, do not miss this oasis.  Your stomach and feet will thank you.

No visit to One World Trade Center would be complete without visiting the memorial site of the Twin Towers.  In the place where both buildings once stood are two memorial pools that are dedicated to the lives lost on 911.  The pools are ringed with names of the individuals who lost their lives in one of this nations worst attacks on our country since Pearl Harbor.  The site is moving and is worth stopping and listening to the water while reading names of the victims and taking in the enormity of the footprints where the two buildings once stood. I have only experienced a similar emotion from the Viet Nam War Memorial in Washington D.C. Take time to reflect on the lives that were lost on 911 amid an amazing architectural environment.

After already a full day, we push on to our last stop on our goal for the day.  A visit to the Whitney Museum of American Art. The Whitney was designed by the international star-architectural firm of Renzo Piano.  Sited next to the Hudson River, on the High Line within the former Meat Packing District, The Whitney is a destination worth spending more time than we had.  The district has experienced a renaissance of redevelopment and is now home to many famous restaurants, new and renovated condominiums and educational institutions.

Although our visit to the museum was cut short by it’s early closing time, we completed the night by walking along the High Line back toward the Hudson Yards.  The Hudson Yards development is a completely unique story we will save for another day.

At night, walking the High Line is was amazing.  Devoid of the usual crowds found during the day, the elevated walkway winds its way through many new and old residential areas. The leisurely walk is occasionally spiced up by opportunities for some pretty fun window peaking…architecturally speaking!

Our last stop for the night and the end of our three days of fun is at the historic Algonquin Hotel and Lounge.  The Algonquin Hotel, its historic Blue Bar and The Round Table Restaurant are renowned for being at the center of the entertainment and literary world since opening for over 80 years. The Round Table Restaurant was the site of daily meetings of New York’s literary elite. In attendance were people like Dorothy Parker, Edna Ferber, Franklin Adams, George Kaufman and Alexander Woollcott (just to mention a few).  They were playwrights, critics and editors who established New York City’s prominent place in live theater.

The lounge is still known for superb night time entertainment.  Tonight, the entertainment had the night off…which meant we could get in!

On our trek from the subway to the Algonquin, we pass the skating rink outside Rockefeller Center.  It’s a beautiful night for skating and more people watching…but we’re hungry and THIRSTY!

Our trip has been amazing and even though this has been a super long post, thanks for hanging on until the end!!

And Now for Your Viewing Pleasure