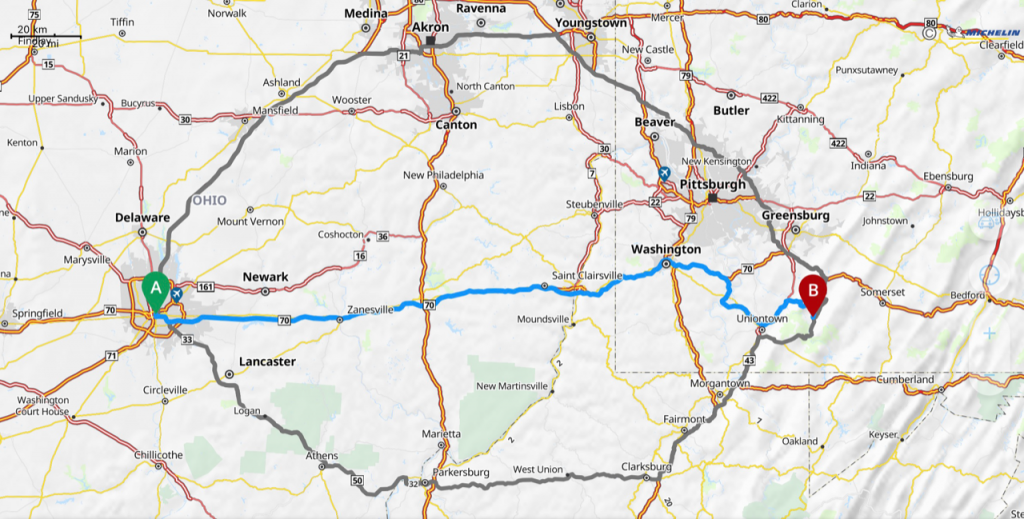 We begin Day 6 by waking up in one of our nicest hotels since leaving Mason City, Iowa. I don’t usually talk very much about our hotel accommodations but staying at the Marriot Hotel in Columbus, Ohio, was extremely pleasant after a long day’s drive from Columbus, Indiana. Since this site is not monetized (meaning I do it strictly for the ‘hobby’ aspect of it) I do not receive anything for placing accolades on places we visit. So, if you find yourself in need of a place to stay in Columbus, Ohio, well, the 85″ TV in the room should be a hint at the quality you’ll receive.

O.K. Enough about that.

Now, this trip has been mostly about architecture and very little about art but that’s about to change. Our primary focus of the day before heading to our VRBO in Mill Run, PA, is to visit the Columbus Museum of Art. CMA, as it’s referred to, has a wide permanent collection of traditional and contemporary art. It also has collections of photography, graphic art, and timely exhibits such as the ‘We Stand with Ukraine’ which included modern and contemporary works by Ukrainian artists. Other exhibits that we enjoyed were works by Bryan Moss, and a photography exhibit entitled ‘Women Behind the Lens’ which include works from the mid-19th century through the 20th century.

Of particular interest was an early works exhibit of Roy Lichtenstein. We typically think of his works from his later pop arts period but at this exhibit, we are able to peer into his early works in Cubism and Expressionism.

Of course, when we travel, I personally am always on the lookout for works by 19th century impressionists and we were able to find a few of the usual great ones. Renoir, Monet, Pissaro, Cezanne to mention just a few. Other great artists such as Picasso and Rivera are found throughout the galleries.

I’ve held back on the images as much as I could manage…there are just too many to choose from…enjoy!

Well the picture might not do the room justice but it was pretty nice!

It's On to Mill Run and Fallingwater!!

After a full day of mind-expanding art, we head to our next destination (‘B’ on the map above), Mill Run, Pennsylvania. We’ve rented a house in the country for 3 days. We’ll be mostly catching up with rest, doing some laundry and meeting up with two friends who will be joining us from New York City and Washington D.C.

So, stay tuned for Days 7, 8 and 9 as we visit more Frank Lloyd Wright designed homes and the piece de resistance (that’s French for…well, you can look it up) of our journey, Fallingwater.