We're On The Road Again ...Finally!

As anyone who misses traveling as much as we have, even a few days of adventure can make it seem like we’re back in normal times. The restraints put on all of us by the Covid-19 pandemic have taken a world wide toll on traveling for work and pleasure.  Gradually, as we come out of the security of the cocoons we have built around our lives, being out in the world, traveling for the sake of experiencing new things is a reinforcement to our belief that someday we’ll be back to normal.

So, this adventure takes us on a three day trip to an area we have been to before but offers new experiences due to the richness of the area’s cultural environment.

Our destination is Crystal Bridges Museum of American Art in Bentonville, Arkansas. For those not familiar with Crystal Bridges, it is the creation of Alice Walton, the daughter of Sam Walton, the founder of Walmart Stores Inc. Her appreciation of American art drove her to create a complex of museum galleries, outdoor gallery spaces, the relocation and new home for an iconic Usonian home designed by Frank Lloyd Wright and a system of paved forest trails all located in the beautiful Ozark hills of northeastern Arkansas.

Located six hours south of our home in Lincoln, Nebraska, it is a comfortable one day trip to Bentonville. We break the trip up by a stop in Kansas City, Missouri, to the Nelson-Atkins Museum of Art for lunch and a quick visit. 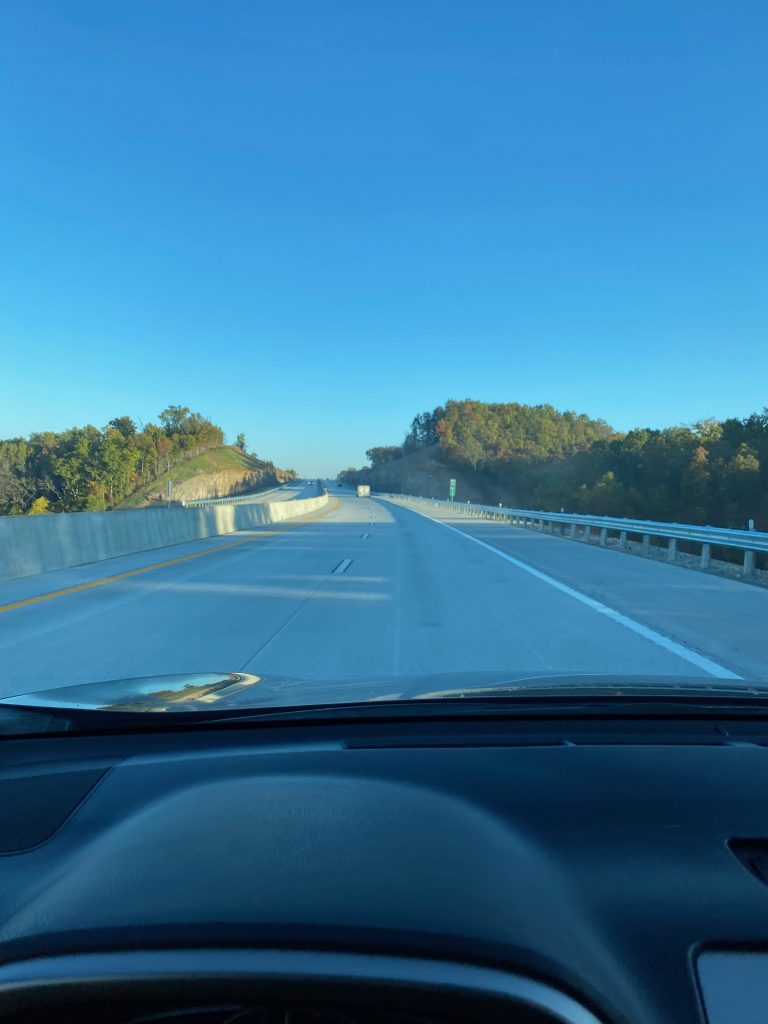 Our first stop during our drive to Bentonville is to the Nelson-Atkins Museum of Art. The Nelson-Atkins has a large collection of ancient and modern art pieces and it regularly rotates that collection throughout the year. It also has special shows and experiences that you can find out more about on it’s website.

Our 2-hour visit allows us to have a relaxing lunch at the museum’s Rozzelle Court Restaurant located in the center of the museum. After lunch, our schedule allows for a quick visit to several of the galleries displaying some of our favorite artists such as Van Gogh, Degas, Monet, Morisot and many others. We also visit galleries of Ancient and Chinese artifacts that are on permanent display. A visit to their website will give you up to date information on what is being highlighted on an given day.

We arrive in Bentonville late in the afternoon just in time for dinner at one of Bentonville’s best restaurants, The Hive. The Hive is located in prestigious 21c Museum Hotel. Although we were unable to stay at the hotel, we did have access to the small museum’s collection on the first level of the hotel. It is definitely worth the effort to visit the hotel, restaurant and museum on your visit to Bentonville.

After a fabulous dinner at The Hive in the 21c Hotel and a restful night’s sleep, we decide to do a little extra curricular exploring.

The area of northwest Arkansas is the home of one of the country’s best but widely under appreciated architects, E. Fay Jones. Known for his delicate structures with an organic influence that he built upon after working with one of America’s other preeminent architects, Frank Lloyd Wright.

Since we were close to many of his works, we chose to visit his best known and exemplary project, Thorncrown Chapel located outside of Eureka Springs. Inspired by Sainte-Chapelle church in Paris, France, it was constructed in 1980. It has become known as the shining example of his design philosophy of using daylight in concert with the natural environment to inspire and lift a person’s spirit.

After visiting Thorncrown Chapel, we head to our main destination, Crystal Bridges Museum. Located on several hundred acres of forest land on the outskirts of Bentonville, the museum is comprised of the main exhibit galleries,  the Eleven restaurant, a gift shop and large assembly and educational spaces. Primarily designed by renowned architect Moshe Safdie, the 217,000 square feet complex was completed on 11/11/11, which became the name sake for the restaurant.

The prime benefactor of the museum was Alice Walton, daughter of Sam Walton, creator of Walmart stores.  Her generosity has enabled the museum to obtain and assemble a premier collection of American art which was her passion. Much has been written about the collection so I won’t delve into the depths of it; suffice it to say, it is extensive and placed in the top tier of American art collections.

The museum grounds are also home to a relatively new addition of architectural importance. Relocated to the museum grounds from it’s original home in New Jersey, the Bachman-Wilson House by architect Frank Lloyd Wright is now safe and sound in it’s new home in the hills of Arkansas. The house was originally built in 1954 in the Usonian style which was Frank Lloyd Wright’s attempt to design affordable and comfortable housing for the masses. The house is open for tours, however, interior pictures were not allowed so all I have included are exterior images for you to see. Suffice it to say, it is worth a visit to the house which is really the best way to experience its creative use of daylight in the shaping of interior space.

Our final experience at the museum was the North Forest Lights walk which literally take you on a meandering paved path through the forest. Augmented by some of the best use of technology one can imagine, we were immersed in an environment of light, darkness and sound. Coupled with the drama of being in the forest at night, the elements of the show work together to create a unique dreamlike experience. At the end of this story is a video that (although rough) will give you an idea of what we experienced.

With One Final Stop

Our short weekend road trip takes us back through Kansas City to a destination of one more architectural site. But first…we must eat!

Our hunger takes us to a restaurant that is becoming one of our favorites in Kansas City, Missouri. Aixois Bistro is (if you can’t tell by its name) a French bistro which is about as authentic as we’ve ever found this close to home. Located at 251 East 55th Street, the Brookside area is also home to many unique European-esqe shops offering a complete experience after lunch.

After lunch, our last stop before returning home was a visit to another home designed by Frank Lloyd Wright–keeping with the theme of our overall mission of architecture, art and food experiences!–called the Bott House.

The Bott House was designed around the same time period as the Bachman-Wilson House (1957) but in Wright’s signature Prairie Style design. It was completed in 1963 (3 years after Wright’s death in 1959) at a cost of $200,000. It is currently privately owned but is open for tours by appointment.

Located in the northern hills outside of Kansas City on a bluff above the Missouri River Valley, the house is a little challenging to find but well worth the effort. The view of Kansas City, Missouri was the primary enticement for Wright to undertake the design at the point in his career where he was moving away from Prairie Style design. The client was very persuasive for Wright to come back to his early roots by designing the home in the reminiscent style of Taliesen, Wright’s home in Spring Green, Wisconsin.

Of note is that the home still has much of the original woodwork, furnishings and finishes throughout. The owner is very conscientious about restoring the home with materials that follow the original design intent.

That pretty much is the most we could pack in over three days during our road trip to Crystal Bridges plus extra side trips along the way. I hope you enjoyed coming along with us again after nearly two years of silent longing for traveling again.

In closing, below is a short (7 min) walk through the forest of Crystal Bridges. It’s best viewed in low light to get the total effect!