Our second day in Vienna was a full one!  In keeping with our developing tradition, we first fixed a light continental breakfast with fresh croissants from the local market (still warm from the oven, I should say!) and Espresso-American-o style, fresh fruit, yogurt and more Espresso-American-o.  We then met Suzanne, a guide we hired through Tours by locals which turned out to be another spectacular way to experience a city with an experienced person at the helm. 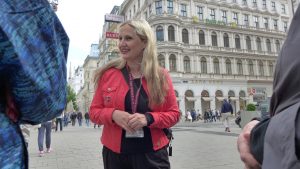 Our tour started out with a stop at a memorial site which was dedicated to several hundred men, women and children who died at the spot during an allied bombing raid on the city. It was considered accidental but now serves as another reminder of the horrors of war for future generations.  Suzanne gave us a local’s perspective on the role Austria played in the war and the mixed feelings of Austrians of how to recognize the role that Austria played in the war. 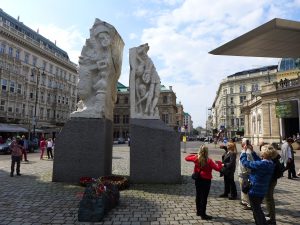 From there, we tour several buildings around the King Leopold’s Palace (also known as the Hofburg Palace) including the Library, Treasury (where they keep the Crown Jewels), and St. Augustine’s Church.  King Leopold was a very popular king due to his general treatment of the Austrian people. He recognized equal rights of all citizens regardless of religion, economic status or rank–something that was very radically progressive at the time.  The Library was open to all people at that time ( the same as it is today) to read, educate and better themselves. 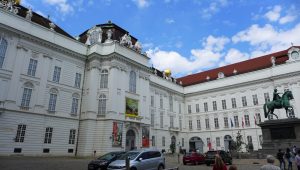 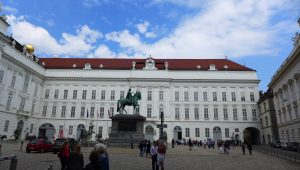 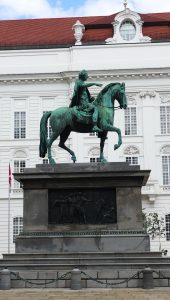 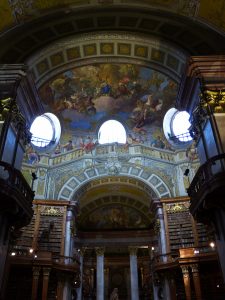 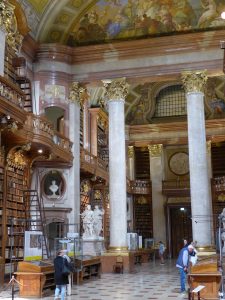 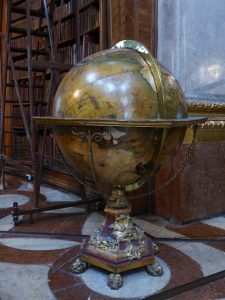 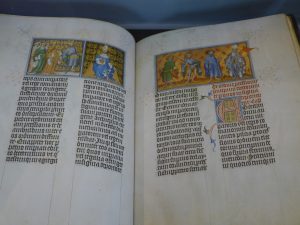 We stopped at the Hero’s Square in front of the Hofburg Palace where Suzanne continued our history lesson by talking about how Austria was brought into World War II by the invasion of Germany prior to the king holding a referendum on whether to support Germany or the Allied countries.  To avoid loosing the referendum, Adolf Hitler invaded Austria prior to the referendum as he was afraid the Austrian people would vote to remain independent over joining with Germany.  Regardless of how it happeded, historians put the  blame on Austria for supporting Hitler thus carrying the burden of responsibility for Germany’s advancement throughout Central Europe. 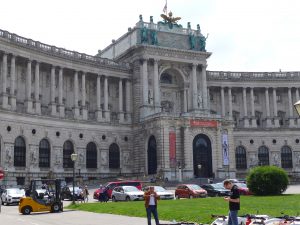 After that bit of reality, we were ready for some rest and refreshment so Suzanne introduced us to Austrian coffee and Sacre Tort (chocolate cake with a thin layer of chocolate frosting) which Austria is famous for…among other pastry delights! 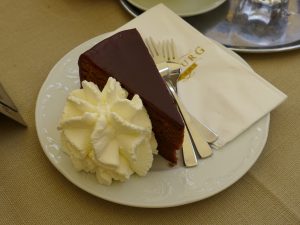 Our final stop with Suzanne was St. Stephan’s Church.  Built in the 12th Century AD, St. Stephan’s is a fine example of gothic architecture.  While we were there, a choir concert was in progress which exposed us to the beautifully resonant acoustics of the church’s interior. 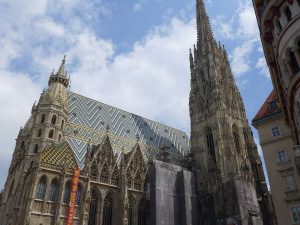 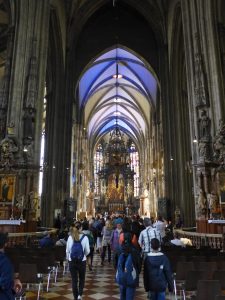 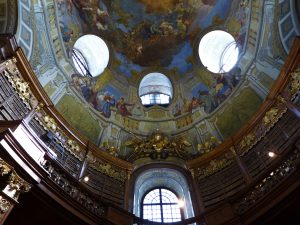 After saying goodbye to our guide, we next took a tour of the Vienna Opera House.  The Opera House was extensively damaged during the war so much of the fine interior spaces had to be rebuilt in the 1950’s.  Consequently, many changes to the interior space are consistent with more modern uses but much of the fine detailing and artwork have been recreated or restored. 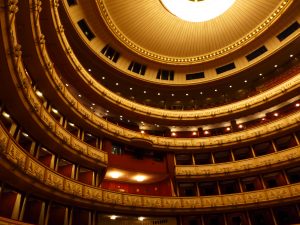 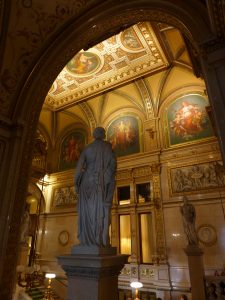 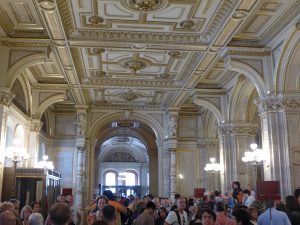 Tired and hungry after five hours since breakfast, we sat down to some Viennese  Goulash, Viennese sausages and brown mustard, cold asparagus soup, smoked salmon and some traditional Viennese spritzers with fruit juice and Prosecco. 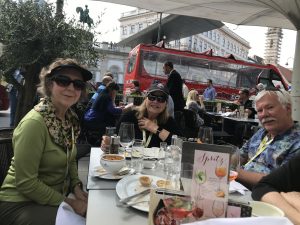 Refreshed, we then forge on to the Albertina Art Museum where we took in an incredible collection of Western and Central European Impressionist art.  Also, the museum had showing a large exhibit of Keith Harring, and American street artist from the mid 1980’s.  Keith Harring is known for his political and social conscience raising awareness to AIDS, political corruption and religious hypocrisy as he saw it. 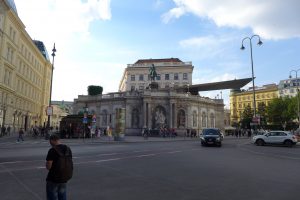 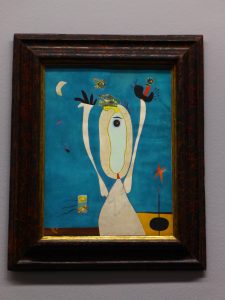 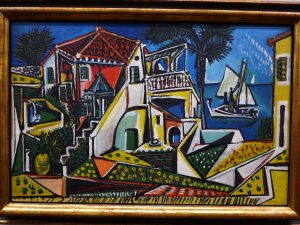 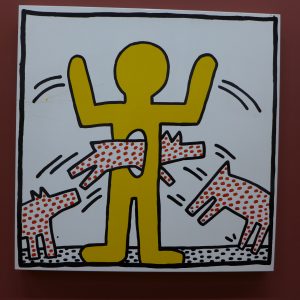 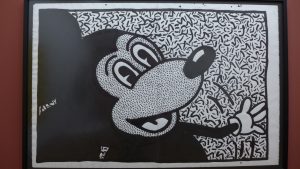 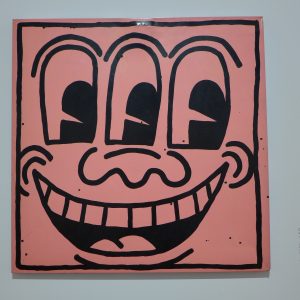 O.K., you might be saying what else?  Well, we just had to knock off one more site while the sun was still up so we took the metro train from our apartment to see the Viennese Giant Ferris Wheel in Volksprater Park near the Praterstern U-stop. Our impression was that it’s lost it’s mystique from the movie The Third Man and is now typical of most state fares with rides, loud music, over priced concessions and generally a lot of people.  I guess that’s fun for some. 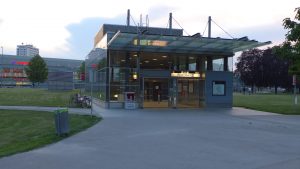 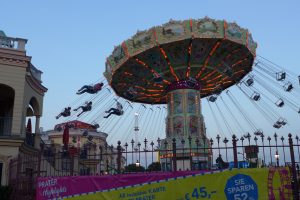 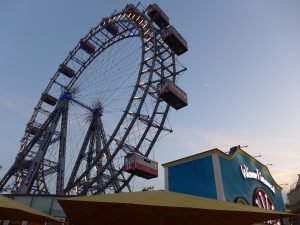 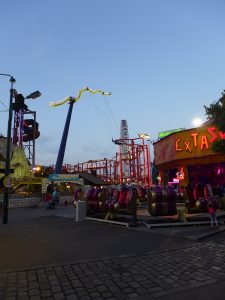 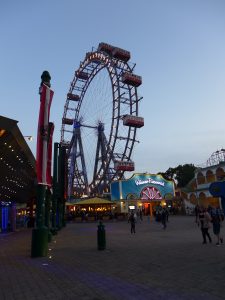 Another 18,000 step day.
Greg, Shelley, Terry, Margee and Margaret
P.S.  The Youtube link below will take you to a video of our visit to Prague, Budapest and Vienna.  Enjoy!!
Youtube

One thought on “Vienna Day 2”