We're Off On Another Adventure!

After a long rest period…caused by forces we’re all too familiar and tired of…we take a road trip with our favorite travel partners, Margee and Terry, to a destination we have long talked about seeing. Fallingwater in Mill Run, Pennsylvania.

To sweeten the trip, we decided to make it a combination of searching for Frank Lloyd Wright’s greatest hits as well as a few other notable architectural delights in our path. Of course, we also included a wide variety of art museums, good restaurants and unique resting spots along the way.

Planning the trip’s itinerary was a group effort. Armed with charts, maps and graphs to keep track of everything, we headed out on our 12 day journey with set destinations, timelines and marginal room for error!! 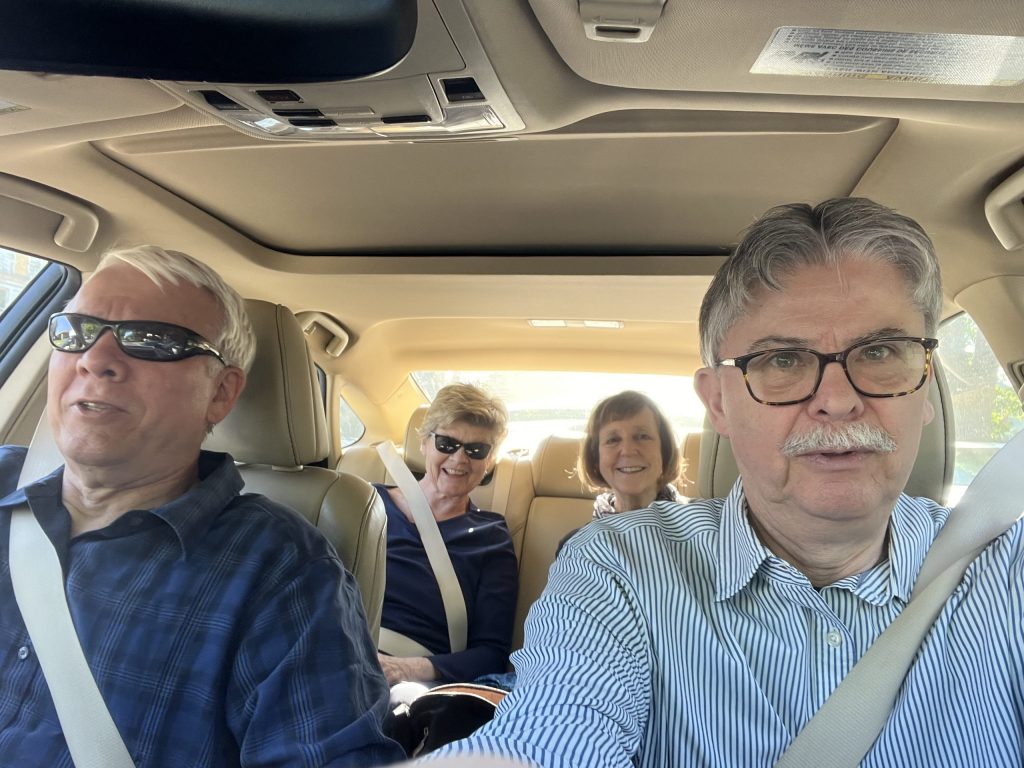 Our first overnight stop is Mason City, Iowa. (‘B’ on the map) Yes, that’s right. Mason City, Iowa, home to the last remaining hotel designed by Frank Lloyd Wright. (Note: to save my fingers from cramping up, from here on, He will be referred to only as ‘FLW’.)

Constructed in 1910, The Historic Park Inn Hotel, as it is known now, was originally designed as a multi-use facility with a bank, offices and hotel. Since it was nearly abandoned and torn down in the early 2000’s, the hotel was saved by  the perseverance of local business interests and it reopened in 2011 as a hotel with a fine dining restaurant. Just as the original hotel served as a catalyst for the community’s architectural housing boom with prairie and international style influenced development, the newly refurbished hotel has been a catalyst for Mason City’s downtown preservation.

The rooms at the hotel were enlarged from the original 10 foot x 10 foot sized sleeping rooms with shared bathrooms to double and king bed sized luxury hotel rooms with private baths with heated floors in FLW’s signature craftsman style.

Before dinner, at the newly opened Markley & Blythe restaurant in the hotel,–namesake of the law firm originally located as a tenant in the 1910 era of the facility–we went on an exploratory walking tour in search of another home designed by FLW called the Stockman House. Along the way, we ran into a woman working in her garden who suggested another area close to the Stockman House that would prove equally interesting with examples of homes influenced by FLW and other architects of the time period. She wasn’t wrong!

If you find yourself in north central Iowa, you should definitely consider an overnight stay at the Historic Park Inn Hotel and take in some of the rich history of a little town made famous by a popular play and movie “The Music Man” and of course by FLW for us devotees.

Here are a few highlights of our first day on the road:

We left Mason City with our newly rediscovered lust for traveling and gaining new perspectives on locally available architectural gems to see and experience. This adventure will prove to be our renewal of an appreciation for cultures beginning “Right here in River City”.